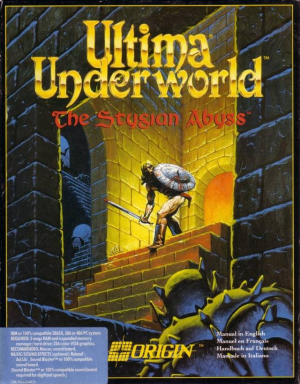 "If thou art truly the Avatar, then perhaps thou canst offer hope. None here can survive the Stygian Abyss and rescue Arial. My mind is set. Corwin shall take thee to the Abyss. Return here with my daughter, and thy innocence shall be proven. If thou dost not return, 'Avatar', then thy lies shall have brought thee low."
—Baron Almric setting in motion the plot of the first game.
"'Tis now almost a year since thy defeat of the Guardian. In that time we have repaired much of the damage done in the Guardian's assault. But though the task is great, the time has come to take pleasure in what we have acomplished. On the Anniversary of thy triumph, we shall hold the Festival of Rebuilding at my castle in Britain. There we shall honor thy victory, and relive past adventures. I shall be honored if thou dost attend."
—Lord British's letter to the Avatar at the start of the second game. What Could Possibly Go Wrong?
Advertisement:

The first game is almost completely disconnected from the continuity of the main series, involving the Avatar Dungeon Crawling through the eponymous Abyss with the goal of rescuing a baron's daughter. The sequel is more closely connected to the series, featuring NPCs from previous games and a storyline that takes place between the events of Ultima VII and Ultima VII Part II, and which fills in a lot of the Guardian's backstory.

The Underworld games are notable for being early examples of true 3D environments, predating quasi-3D First Person Shooters such as Wolfenstein 3-D and Doom. They are also regarded as the Ur Examples of the Immersive Sim genre.

The long-awaited continuation of the series was Kickstarted

under the title Underworld Ascendant.

Tropes present in the Ultima Underworld games include: