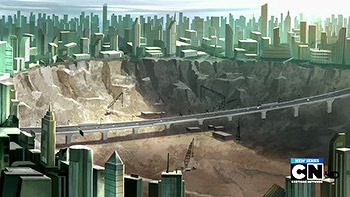 Only fourteen billion dollars lost in damage. Yep... nothing else to report.
"What happens when you detonate a spherical metal honeycomb over five hundred miles wide just above the atmosphere of a habitable world? Regardless of specifics, the world won't remain habitable for long."
—On the ending of

Fridge Logic doesn't just find plot holes; it can make your typical happy ending into a Downer Ending, and render even the most flawless moral victory into Black-and-Gray Morality. How? By helping the viewer realize that the "survivors" at the end of a work don't have a future. When authors use large and amazing technologies and world or even galaxy-spanning threats, they run the risk of letting the excitement of Stuff Blowing Up get the better of them and not think through how the survivors will make a living afterward, even though they can't help but celebrate as the Evil Tower of Ominousness explodes with its master's demise.

Y'see, Happily Ever After implies there's arable land to farm, electricity and running water, and a semblance of civilization to go back to, as well as at least several hundred to several thousand people surviving by the end.note Exact figures are debated by biologists, but it is known that most species which reproduce sexually cannot survive in the long term if there's too much inbreeding. A Zombie Apocalypse, nuclear holocaust, Colony Drop, The Great Flood, or anything that can cause The End of the World as We Know It will have subtle and far-reaching effects even if it's stopped. Even if humanity does manage to survive (humans are clingy bastards) there are bound to be massive casualties. Even if the work runs with the above scenarios and makes it about characters from a Terminally Dependent Society surviving After the End, the author may end up seriously overestimating their and their civilizations' chances of survival.

Cue the Moral Dissonance if the heroes are primarily responsible for this near disaster. The subversion of this trope is if the heroes fully realize the effects of their actions... and choose to follow through anyway. Maybe they are amoral sociopaths who do not care, maybe the Omniscient Morality License makes it such that the ultimate consequences will be preferable to the status quo, or maybe things are beyond the Godzilla Threshold and so anything goes.

Some common examples of this trope coming into effect include:

Keep in mind that this is an inferred holocaust. If the work explicitly states that there's a horrible aftermath or if it ends on a cliffhanger (for example, depicting an undetected bomb about to explode), then it isn't an example of this trope; you may be looking for Reality Ensues. Also note that, despite the name, the "holocaust" doesn't have to involve massive death; it could be as simple as a criminal getting away because the writers didn't give the good guys enough evidence to convict.

A possible reason why audiences may see a "happy" ending as an Esoteric Happy Ending. Contrast Inferred Survival, and contrast No Endor Holocaust for when this possibility is nixed by Word of God or subsequent material. For more general plot points that are chilling when contemplated at length, see Fridge Horror. Compare Hero Insurance.

Ending Trope, so spoilers be ahead.

Nostalgia Critic goes over how the movie never resolved the plot about unifying the nations and how they would be slaughtered by the invading army shortly after the end of the film.

Nostalgia Critic goes over how the movie never resolved the plot about unifying the nations and how they would be slaughtered by the invading army shortly after the end of the film.