Film / The Testament of Dr. Mabuse 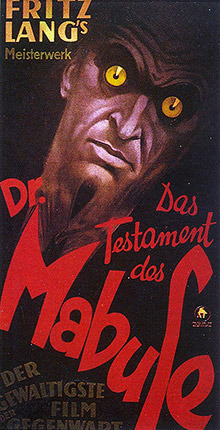 The Testament of Dr. Mabuse (German: Das Testament des Doktor Mabuse) is a 1933 German noir film directed by Fritz Lang. A decade after the success of Dr. Mabuse, the Gambler, Lang decided to revisit the character in the sound era, with a plot appropriately based on the eeriness of recorded sound.

In the film, it is ten years or so since the criminal empire of Diabolical Mastermind Dr. Mabuse was crushed by the authorities, and the evil doctor, driven insane by his fall, confined to a mental hospital. Suddenly, the catatonic Mabuse has reawakened and begun to obsessively scribble notes on hypothetical crimes. Which would only be of academic interest, if it weren't for the new criminal gang that seems to be putting those plans into practice. Opposing them are Police Inspector Lohmann (Otto Wernicke), who'd appeared in Lang's previous film, M, and Kent (Gustav Diessl), a down-on-his-luck criminal who joins the gang but soon grows disgusted with their extreme measures.

This was the last film Lang made before leaving Germany. The Nazis, who had come to power just two months before the film was scheduled for release in Germany, promptly banned it. It's generally assumed (thanks to Lang's own testimony) that the Nazis considered it a Take That!, though this isn't certain. After all, the Nazis had praised ''M'' as an alleged "pro-death penalty" film. Joseph Goebbels, Hitler's Propaganda Minister, publicly objected to Testament as "a practical guide for criminals" rather than ideology - though he reportedly kept and screened a private copy for himself.

Regardless, Lang, whose mother was a practicing Roman Catholic but Jewish by birth, left Germany soon after and made his way to Hollywood. Lang's wife Thea von Harbou, who had been his screenwriter and creative partner for almost all of Lang's career, joined the Nazi Party, divorced Lang, stayed behind in Germany, and worked in the Nazi movie industry until the end of the war. A quarter-century after he left, Lang came back to Germany and made another sequel, The 1000 Eyes of Dr. Mabuse. The movie was remade in 1962, the remake being retitled The Terror of Dr. Mabuse in English.

Testament had a complicated release history. Lang's original German cut saw limited release in Austria and Hungary in 1933. A French-language version, shot simultaneously by Lang with French-speaking actors, became the basis for most international prints. While the Nazis initially banned Testament, they released a heavily-edited version in the late '30s. The biggest change was added narration by Inspector Lohmann stressing the Weimar setting and claiming Mabuse was Jewish.

Testament didn't reach America until 1943, in the midst of World War II, when it was again reedited, this time to emphasize the Nazi parallels. Indeed, some versions added dialogue comparing Mabuse to Adolf Hitler. In 1952, a heavily cut (from 124 to 82 minutes), English-dubbed version entitled The Crimes of Dr. Mabuse appeared, which remained the standard version for several decades. Lang's original German cut didn't resurface until 1973, when it was re-released to general acclaim.

(It should be noted that this film has a major case of It Was His Sled. To avoid the trope examples below being a block of spoiler code, the famous twist in question has not been whited out. If you really want to see the film unspoiled, don't read any further.)