To Create a Playground for Evil 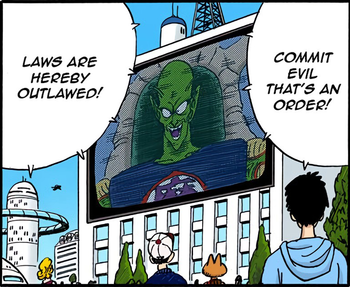 "You can steal, destroy, injure, and murder! No one will stop you! Evil shall be unfettered!"
"Now, the world shall be my plaything! I shall bring about an age of fear and chaos! And it shall be glorious!"
— Dr. Eggman Nega, Sonic Rush Adventure
Advertisement:

Evil Overlords want to Take Over the World, and Omnicidal Maniacs want to destroy the world, but these villains just want to change the world. Rather than conquer it, blow it up, or kill everyone on it, they are much more content to simply turn it into the most horrible and messed up place possible — their own personal playground, in other words. Villains who intend on this goal are likely doing it For the Evulz.

Compare Dystopia Justifies the Means, which is when a bad guy wants to make a deliberately oppressive government, Anarcho-Tyranny, where the tyrant is intentionally allowing or inducing some lawless anarchy for his advantage, and Infernal Paradise, where the hellish playground is rooted in Blue-and-Orange Morality rather than simple malice.