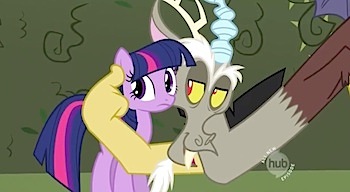 "I got tired of tormenting Starfleet captains, so now I'm playing with ponies instead."
"You should see the looks on your faces! Priceless!"
—Discord
Special Guest Star: John de Lancie as Discord
Written by M.A. Larson
Advertisement:

Cheerilee and the kids are visiting the world famous Canterlot Sculpture Garden, where there are statues representing friendship, victory, and... a tall slender fellow with a head of a pony and a body made of many different animals, like a lion's paw and a snake's tail. Cheerilee asks the class what that represents, and Cutie Mark Crusaders respond with a variety of answers, calling Scootaloo a dodo in the process.

The Cutie Mark Crusaders begin to fight amongst each other until Cheerilee explains that, in a way, they're all right. The statue represents discord, and because they demonstrated it so well they have to write an essay. Cheerilee and the kids head off and did that statue just laugh?

Back in Ponyville, Rainbow Dash is flying around when she is hit by a low-flying pink cloud. Now, we know this is a Sugar Bowl, but it's been established that clouds do not move on their own outside the Everfree Forest. They are also not made of cotton candy. Suddenly, cotton candy clouds are everywhere and they pour out rain made of chocolate milk.

Soon the rest of the Mane Six meet up at Sweet Apple Acres, where cornfields are turning into popcorn, apples are growing to mammoth sizes, and rabbits are growing deer legs. The girls manage to calm the candy storm and the mutated animals through teamwork, only for Spike to burp up an emergency letter from Princess Celestia.

At the palace, Celestia informs the girls that an old foe has returned...Discord, the mischievous Spirit of Disharmony... and gives some backstory on Equestria. Discord once ruled the land in eternal chaos and unhappiness, until Celestia and Luna discovered the Elements of Harmony and turned him into a garden ornament. However, since Celestia and Luna are no longer connected to the Elements (probably because of that whole Nightmare Moon business), the spell on Discord has lifted. It is now up to our heroines, the champions who defeated Nightmare Moon and redeemed Princess Luna, to wield the Elements of Harmony once again to defeat this dark god of chaos.

...But they're missing! Who could have stolen the Elements of Harmony? The stained-glass windows begin to move by themselves, all handiwork of the culprit, Discord.

It seems Discord has "borrowed" the Elements, and he already knows all about our heroines and which Element of Harmony they represent. Celestia is getting impatient with Discord's escapades, and let us remind you that she usually has the patience of a saint. Discord gives our girls a riddle.

Discord: To retrieve your missing Elements, just make sense of this change of events. Twists and turns are my master plan, then find the Elements back where you began.

Twilight believes Discord is referring to the hedge maze out back... where the children were arguing earlier. Surely with the magic of flight Rainbow Dash will find the Elements in no time. That is, if her wings were still on her. Fluttershy's wings and the unicorns' horns disappear as well, and Discord appears! He says that it's time to play a game. The first rule is no flying or magic. The second rule is everypony has to play, or the game is over.

The girls enter the maze and, with their first united step, are instantly divided by Discord's magic. He then takes the time to manipulate all of Twilight's friends to reject the elements that they represent, finishing the job with magic and causing their colors to become desaturated.

After each pony gets corrupted, Twilight meets up with them, shocked and confused at they are all now the opposite of their Elements, but has no idea why. They eventually spot the disloyal Rainbow Dash flying away — because she broke the "no wings, no magic" rule, the game is over and Discord has won! Black clouds and lightning abound! All is lost, a storm of chaos has arrived! Equestria is doomed!

Discord: Looks like we might be due for a big old storm of chaos! [Evil Laugh accompanied by Dramatic Thunder]

Continued in "The Return of Harmony, Part 2".