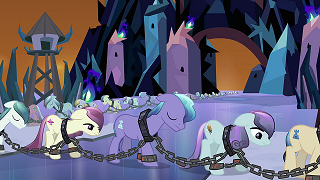 At least King Sombra had good health care.
"Man rules now where They ruled once; They shall soon rule where man rules now. After summer is winter, and after winter summer. They wait patient and potent, for here shall They reign again."
— The Necronomicon, The Dunwich Horror
Advertisement:

In the beginning, when the world was first formed out of dust and ice, before mankind came to dominance, the world was ruled by dark forces, evils beyond imagination, ancient tyrants. Or at least that's what some horror and fantasy stories want you to believe, that before man arrived (and even sometimes after) there were creatures that ruled this world that are now gone.

Most often, this is important to the Back Story of a series, giving writers room to introduce remnants of those old evils sealed in a can. Sometimes The Dark Times become The Time of Myths and then lead to Götterdämmerung. Alternatively, the creatures that populated The Dark Times are merely waiting Beneath the Earth until they regain their strength.