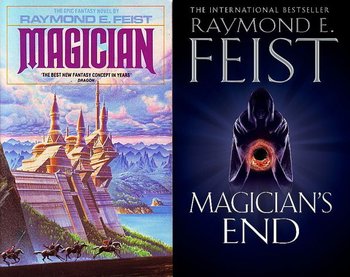 Written by Raymond E. Feist, this is one of the longest-running High Fantasy series (thirty books) ever written note compared to powerhouses like Xanth (thirty-four) or Discworld (forty). The Riftwar Cycle encompasses ten sagas (most of which are set up as trilogies) and a collection of short stories, all of which are set in the same universe if in distinct Time Periods. The first volume was published in 1982 and the final novel was published in 2013.

Most of the action of the series centers upon The Kingdom of the Isles on the world of Midkemia, which was originally developed by Feist and his friends for an in-house Dungeons & Dragons campaign. However, the novels take place some five centuries before the time when this campaign was set.

There are five total rift-wars during the cycle, the namesake Riftwar, followed by the Serpentwar, the Darkwar, the Demonwar and finally the Chaoswar. During each of these wars, Midkemia is threatened by invasion from Another Dimension through portals known as rifts. Though a different enemy is at the heart of each invasion, these are all consequences of the same underlying evil.

The books are split into several sub-series, displayed here in chronological order of the world's history:

Midkemia, an online MUD based on the series, can be found here