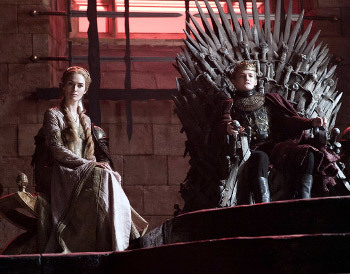 "Mother said it's my turn to be king!"
"Enter: Fastrada. Pippin's stepmother. Devious, crafty, cunning, untrustworthy, but a warm and wonderful mother. Dedicated to gaining the throne for her darling son, Lewis."
— The Leading Player about Fastrada, Pippin
Advertisement:

This is basically when someone could not have otherwise become king without their mother's efforts. It doesn't have to necessarily be a king—it can refer to any situation where your mother makes sure you have power.

It could be that your mother is a political actor in her own right who plans to get you into power, scheming and murdering all other heirs and finally you become king. A woman in such a society can't be head of state, so her son becoming king is the next best thing. In that case, she's likely the Woman Behind the Man, and her son, once he's in power, may be a Puppet King.

For gender reasons (Heir Club for Men), daughter variants are less common, but not unheard of—many an ambitious mother paraded her beautiful young daughter before a king or prince in hope she'd be picked as a Hot Consort. In that case, it sometimes becomes a three-generational plan: She gets her daughter made queen or princess, and then her daughter has a son who will become king. Alternatively, if the mother in question DOES make her daughter queen, then the mother could become the king’s mother-in-law.

Merely inheriting your throne via your mother's line doesn't count; your mother has to actively support you in assuming the position. (This usually means scheming.)

While it doesn't actually have to be becoming king, that is the most common case. Historically, a king's father usually had to die before he could become king, but many kings' mothers were still alive and well during their reigns, often titled "Queen Mother." In the Ottoman Empire, sultans tended to have royal harems with many concubines—but they only had one mother (who was usually the favored concubine of their predecessor). She was effectively their queen, the second most powerful person in the empire after the sultan himself, and bore the title "Valide Sultan note  literally "Mother Sultan" ."

The mothers in question tend to be villainous, often overlapping with Evil Matriarch and God Save Us from the Queen!. This is doubly true if the son in question is secretly illegitimate, or otherwise not the biological son of the late king, making him not the "rightful heir". If her son has half-brothers in line to the throne before him, she will certainly be a Wicked Stepmother to those stepsons.

Subtrope to Vicariously Ambitious. The mom in question is (whether heroic, villainous or any combination thereof) most likely an Almighty Mom. If she was married to a king, she may have been a Lady Macbeth as well. Compare Villainous Mother-Son Duo.