Inn Between the Worlds 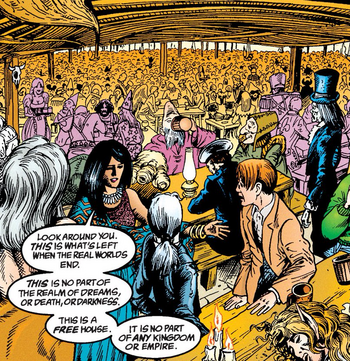 It may be an inn on a road in a Heroic Fantasy world, a Wild West saloon, a bar in a high-tech space station, or just a local pub — or it could be all of these at the same time. The Inn Between the Worlds exists simultaneously in different worlds, universes and/or times, or perhaps just jumps around in the fashion of The Little Shop That Wasn't There Yesterday. Whether you can reliably return to where you came in varies.
Advertisement:

Inns Between the Worlds, though they connect to some or all worlds, are not themselves part of any world. They are typically places of truce and/or sanctuary, and laws of physics and/or reality may be suspended as needed. (Quite a lot of them, for instance, are Bigger on the Inside.)

It is possible that the Inn was set up specifically as a Truce Zone by all sides both to allow respite from a war and to allow the combatants to have a place to discuss peace treaties or possible surrender. It's not in anyone's universe so it's a true place of neutrality. Plus they have really good chili dogs.

Always check the rules of the establishment very carefully before you or somebody next to you makes a jackass of themselves in the Inn; getting thrown out by the bouncer may well prove rather more hazardous than you could ever want to know about, but it could save your life to find out what the consequences are likely to be beforehand.

Sometimes Inns are used as a Framing Device for the patrons to tell strange and fantastic stories of their worlds. Sometimes it enables a Time Travel or Trapped in Another World plot, where the character leaves the inn through the wrong entrance (or the right entrance depending on your point of view). Perhaps it enables a Crossover for characters from different worlds or times to meet in a friendly environment. On rare occasions, if no one ever leaves, it may turn out to be a kind of afterlife.