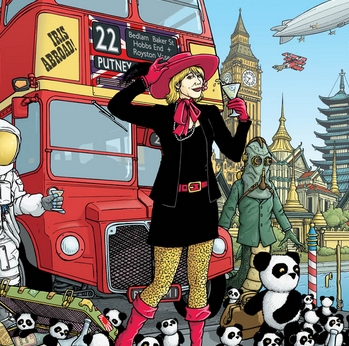 The Widget Series adventures of Iris Wildthyme, transtemporal adventuress, occasionally take place in the Doctor Who Expanded Universe and occasionally in different continuities altogether. Iris is an old — very old — Rebellious Spirit with a love for booze, music and sex. She's had a slew of different bodies and dashes in and out of universes as a merry, if somewhat ditzy, Fourth-Wall Observer.

Iris originated in the magic realist Phoenix Court series of novels by Paul Magrs, who imported the character of Iris Wildthyme into the Doctor Who Expanded Universe novels wholesale when he started writing those as well. After appearing all over the Eighth Doctor Adventures series (with a hop over into the Past Doctor Adventures for good measure), Iris was subsequently transported into the Big Finish Doctor Who audios and eventually given her own audio spinoff. Big Finish deliberately chooses to ignore the massive Continuity Snarl that would be caused by her appearances in the novels and the audios as though they were all the same timeline — which Iris comments on. Her unexplained appearances in all of the above are simply considered part of her charm.

The many stories gladly make use of Easy Amnesia, Multiple-Choice Past, Broad Strokes and just plain Blatant Lies in regards to their internal continuity. The series in general thrives on Rule of Funny and, where it touches on Doctor Who continuities, provides a much Lighter and Softer atmosphere than most of the Doctor Who Expanded Universe franchise — albeit with plenty of violence, booze and innuendo.

Iris's adventures even spawned their own series of spin-off novellas starring her Mexican wrestler friend Señor 105.