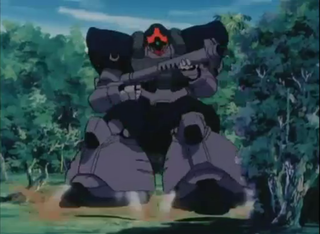 The MS-09 Dom, equipped with downward-facing thermonuclear jet engines for all your hover-skating needs.
Advertisement:

Hover skating is the ability to coast along as if skating, but without actually touching the ground. This can be an ability that a character can use, an item that they can equip, or a built-in function of a Robot, Cyborg, or Humongous Mecha. Usually, hover skates will act like foot-mounted hovercraft: they'll propel the user forward as well as lifting them up (so no need to spend muscle power to move, like normal skates) and they'll be able to float over things that wouldn't normally support the user's weight (like water). On the flip side, this means they'll generally be unable to lift more than a few inches off the ground.

Hover skates combine the best parts of both rollerblades and Hover Boards; like rollerblades, they let you move your feet independently (allowing for a greater array of fancy footwork) but have all-terrain capability provided by hovering. Since hover skates are usually securely fastened to your feet, you don't run the risk of falling off like you can with a Hover Board, either. From a narrative perspective, they're useful to writers since they allow many of the useful properties of Flight (high speed regardless of terrain, moving across water or other fluid surfaces), but the strict altitude limit means that the heroes can't just bypass all their problems by flying over them.

Compare Rollerblade Good and Hover Board. Contrast Rocket Boots (which allow for full-on Flight). When a Humongous Mecha has hover skates, it may be a type of Hover Mecha. Often a form of Power Floats. See also Ghostly Glide, for a similar type of movement used to make something seem supernatural or otherworldly.