Video Game / The Legend of Zelda: Ocarina of Time 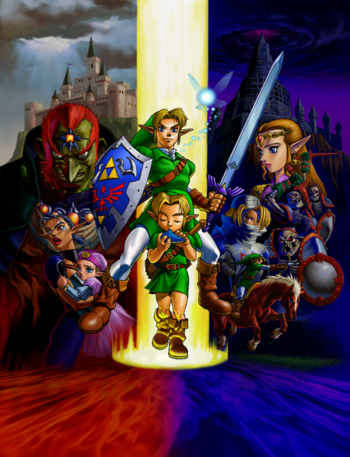 There are many stories, but only one Legend.
"Have ye what it takes?"
— Tagline for the original ad campaign,

Ocarina of Time is the fifth entry in The Legend of Zelda series, originally released for the Nintendo 64 in November, 1998. It is the first 3D game in the series and the first Fifth Generation title, and it set the standard for all the later games in the series, with its then-unheard-of style of cinematic presentation and introduction of many mainstay elements of the franchise. It's also the first Zelda game that Eiji Aonuma worked on.