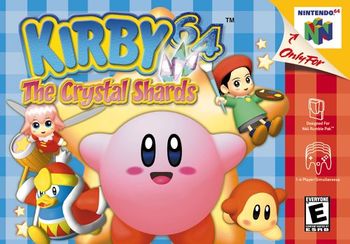 There's that smile!
Kirby 64: The Crystal Shards (Hoshi no Kirby 64 in Japanese), released in 2000, is the first game in the Kirby series to go in a 3D-ish environment, and the only Kirby game for the Nintendo 64.
Advertisement:

One day, the fairy planet of Ripple Star is overshadowed by a great darkness—specifically, a mass of Dark Matter. To prevent Ripple Star's Crystal from falling into the wrong hands, the queen launches it into outer space with one of her fairies, Ribbon. But Dark Matter sends three small orbs of itself in space to chase and attack the crystal, causing it to shatter into several pieces.

...Meanwhile, Kirby is watching a meteor shower when Ribbon lands on him holding what's left of the Crystal. A second shard falls on Kirby shortly thereafter; when he offers it to Ribbon, the Crystals recombine. These shooting stars are the other Crystal Shards, which must be collected in order to save Ripple Star. Kirby is more than happy to help, so he sets off with Ribbon on a quest across several planets, meeting up with his friends along the way.

Directed by Shinichi Shimomura, most of the action is played on a 2D plane, with enemies occasionally flying at Kirby from the "background" to slow him down. One of the most noteworthy gameplay mechanics is combining Kirby's Copy Abilities to create new ones (for example, the combination of Burning + Stone turns Kirby into a living, aim-able volcano). Kirby's three allies of King Dedede, a Waddle Dee, and a human painter named Adeleine will also occasionally assist him in small scripted sequences within some of the stages.

This game is the third and final part of Shimomura's "Dark Matter Trilogy", the previous entries being Kirby's Dream Land 2 and Kirby's Dream Land 3, and thus inherits their more slow-paced, simplistic gameplay and more whimsical, dream-like art direction and music. Like previous Shimomura-directed titles, it was relatively overlooked for not being like the Masahiro Sakurai-directed games (especially Kirby Super Star), and like Dream Land 3 suffered from being released late in its system's lifespan (just a year before the release of the Nintendo GameCube). However, like the rest of the Dark Matter Trilogy, it's come to be regarded as a hidden gem within the Kirby catalog in the decades since. Along with its predecessors, it was included as part of Kirby's Dream Collection: Special Edition, for Kirby's 20th anniversary, and was later added to the Nintendo Switch Online Expansion Pack in May 2022.

If you beat the boss of Ripple Star without collecting every crystal shard, you'll be treated to an ending that seems happy, until...

If you beat the boss of Ripple Star without collecting every crystal shard, you'll be treated to an ending that seems happy, until...