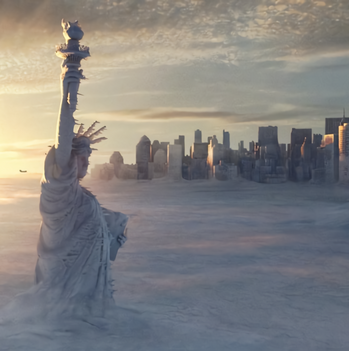 Who left the fridge open?
Some say the world will end in fire,
Some say in ice.
From what I've tasted of desire
I hold with those who favor fire.
But if it had to perish twice,
I think I know enough of hate
To say that for destruction ice
Is also great
And would suffice.
— Robert Frost, "Fire and Ice"
Advertisement:

An ice age is a slow, gradual kind of apocalypse, one that is difficult or impossible to prevent, undo or mitigate. Most other kinds of stock apocalypses are typically fairly dramatic and immediate in scope, and there is usually something that can be done to keep them from happening or to recover afterwards — divert the asteroid, cure the plague, defeat the zombies, ride out The Great Flood, rebuild society after the nuclear war. They may be devastating, but there is a clear agent that can be faced and overcome. An ice age, however, is quite a different beast. It's slow, usually — it takes some time for it to set in, ranging from a few years to a few centuries of gradually cooling weather, and it's often possible for multiple generations of people to live and die without it making a significant impact on their lives. However, ice ages are in a very literal sense the Mighty Glaciers of apocalypses — they may take a long time to truly set in, but eventually the glaciers will come to your doorstep, and when they do there will be very little you will be able to do about them.

This is the other key aspect of glacial apocalypses — there's usually little to nothing that can be done to prevent or undo them, at least on a global scale. Most other global disasters typically give the main characters an obvious target to deal with — even a disease is a foe to fight against. This provides the heroes a means of undoing the end of the world and a discrete figure to serve as the narrative's antagonist. An ice age does not do this — what are you supposed to strike against? The snow? The chilling air? The darkness? The lack of food? A specific villain may sometimes be responsible for these events, but the majority of the time global ice ages are the result of grand climatic, geologic, or cosmic events happening beyond and in spite of humanity, and which are entirely beyond human civilization's ability to affect. When the ice age is caused by human action, it's typically the result of some kind of blunder — nuclear winter is a common culprit, as are attempts to undo Global Warming Gone Horribly Right — that broke the global climate beyond repair.

Consequently, a core element of these stories is the overwhelming presence of a hostile and unpersonal world — something too diffuse to rail against or hate even in effigy, as humanity is brought to its knees by the uncaring clockwork of the universe. Characters may be able to ensure their own survival or those of others, perhaps even establish a community of survivors, but very rarely will they be able to preserve more than a fragment of civilization in a cold and barren world.

In practical terms, the main perils of the ice age are hostile climate and resource scarcity. As the glaciation grinds on, more and more land becomes covered by snow and the advancing glaciers; this buries cities, freezes farmland, and destroys forests, gradually starving civilization and the global ecosystem alike of food, resources, and living space. The environment itself becomes the enemy, as survival becomes impossible outside of artificially warmed areas and every breath is painful.

Civilization must adapt or be destroyed, and survival will be hard. In early stages of these events, society often breaks down gradually. True collapses will begin in polar and then temperate areas, the first to freeze over, although warmer climes may experience their own issues with fleeing refugees and political disturbances even before feeling the first hints of chill themselves. Once the ice age has progressed further, sometimes to the point of turning the world into ice planet, civilization will endure only in isolated pockets of survivors, usually huddling around or within artificially warmed areas, and food and resources will be scarce and extremely valuable for anyone who doesn't feel like Braving the Blizzard to forage for whatever's left in the frozen ruins of civilization. Survival typically comes at a cost, and in extreme cases, humanity will be ground into nonexistence no matter what it does. Prevailing feelings of hopelessness or despair are often present as civilization slowly recedes and pockets of survivors are snuffed out over time.

It's also not uncommon for some kind of societal regression to occur. Some works may have surviving enclaves resort to totalitarianism or zealotry in order to maintain the control they need to survive. In other cases, humanity may regress to the state it lived in during the last great ice age — even mammoths may reappear.

Subtrope of Apocalypse How and Endless Winter.