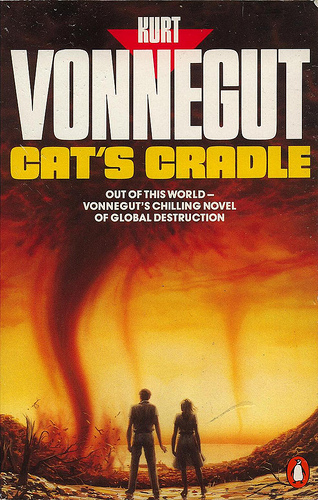 "There are lots of good anecdotes about the bomb and Father ... For instance, do you know the story about Father on the day they first tested a bomb out at Alamagordo? After the things went off, after it was a sure thing that America could wipe out a city with just one bomb, a scientist turned to Father and said, 'Science has now known sin.' And do you know what Father said? He said, 'What is sin?'"
Advertisement:
"No wonder kids grow up crazy. A cat's cradle is nothing but a bunch of X's between somebody's hands, and little kids look and look and look at all those X's..."
"And?"
"No damn cat, and no damn cradle."

Cat's Cradle is a 1963 novel by Kurt Vonnegut. The protagonist, who introduces himself to us in the first person narration as simply "Jonah", real name "John", begins the story intending to write a book about the atomic bomb. In his research, he comes to learn about the family of one of the chief scientists who created it: Dr. Felix Hoenikker. His research also uncovers the possibility that the man went on to create something else that could wipe out all life on Earth.

Some time afterwards, John winds up on the Caribbean island of San Lorenzo, where he meets all three of Dr. Hoenikker's children, as well as the woman of his dreams. He also learns about the history of the island, and a man known as Bokonon, who has created a strange religion that almost every resident of the nation seems to practice, despite it being outlawed by the country's eccentric military dictatorship.

And then everything goes completely to hell.

And I would climb to the top of Mount McCabe and lie down on my back with my history for a pillow, and I would take from the ground some of the blue-white poison that makes statues of men and I would make a statue of myself lying on my back, grinning horribly and thumbing my nose at You Know Who.