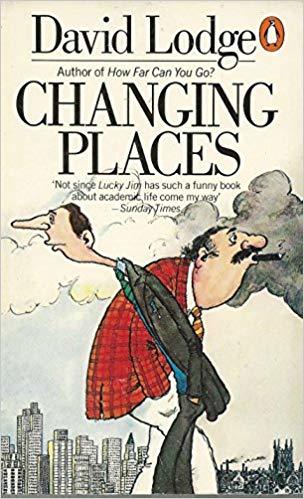 Changing Places is the fifth novel by the British author David Lodge, and the first of his so-called "Campus Trilogy". It was published in 1975.

The University of Rummidge, a middling redbrick establishment in the English Midlands, and Euphoria State University, a leading institution at Plotinus on the west coast of America, have long had an exchange programme based on nothing more than a coincidence of architecture. Because of the assymetric relationship Rummidge was usually represented by a senior member of staff while Euphoria State struggled to find anybody to spend a year in a place they probably hadn't heard of. But in 1969, the roles are reversed. Rummidge sent Philip Swallow, a talented teacher but an undistinguished scholar with no publications to his name, to Euphoric State where published papers are everything, and Euphoric State sent Morris Zapp, a high-flying and much-published full professor to Rummidge. The novel follows each man's progress as their lives begin to intertwine in unexpected ways against a background of student unrest and authoritarian reaction to it.

The novel is in six sections, using a variety of styles.

Part 1, flying uses a detached, omniscient narrator to introduce the two protagonists as their respective paths cross over the North Pole.

Part 4, reading is a series of news items and other third-party documents.

Part 5, changing reverts to the conventional narrative of Part 2.

Part 6, ending is in the form of a screenplay.