No Communities Were Harmed 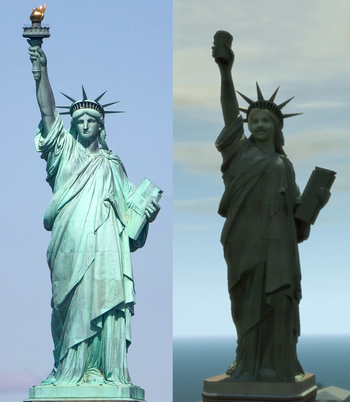 Fictional cities and occasionally countries are often obvious stand-ins for Real Life ones. They have a different name, different landmarks, and a different population, but the look, conventions, and society at large are the same. This gives the setting more flavor than just calling it City of Adventure.

Where names or street numbers are obscured, or not obscured at all, but accurately based on real locations, Real-Place Background applies.

See also Hollywood Atlas, Big Applesauce, and Fantasy Counterpart Culture. Occasionally involves Istanbul (Not Constantinople). Contrast with City with No Name, Where the Hell Is Springfield? and Canada Does Not Exist when the city's location is deliberately concealed or seems to contradict itself. Also contrast with Everytown, America, in which the location is deliberately made generic. In some cases anyway.