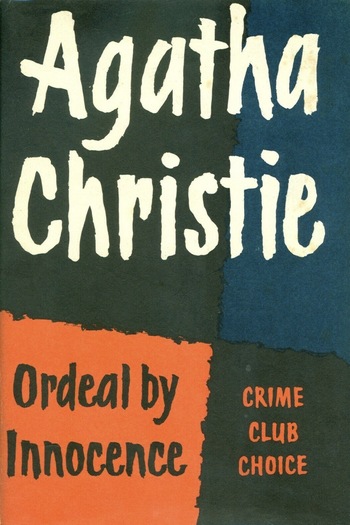 Ordeal by Innocence is an Agatha Christie murder mystery first published in 1958.

Two years before the beginning of the novel, Jacko Argyle was sentenced to life in prison for killing his adoptive mother Rachel Argyle. Jacko insisted during the trial that he was innocent and that he was getting a lift with a stranger during the time of the murder. This stranger couldn't be found, despite an extensive search. Jacko later died in prison. In the present day, Dr Arthur Calgary visits the Argyles to tell them that he was the stranger that had picked up Jacko two years earlier. He had not come forward earlier because he had been hit by a lorry soon after dropping off Jacko, and the accident had caused amnesia which made him forgot the hitchhiker he had picked up. Expecting gratitude from the Argyles for clearing Jacko's name, Dr Calgary is surprised when the reveal is instead met by anger and hostility. Dr Calgary later decides to investigate the murder of Rachel Argyle, to protect the innocent by finding the murderer.

The novel has been adapted for the screen three times: in 1984 as a feature film, in 2007 as an episode of Marple (despite Miss Marple not appearing in the book), and in 2017 as a three-part BBC miniseries filmed in Scotland; the latter was originally intended to air as 'a Christie for Christmas', following the 2015 adaptation of And Then There Were None and the 2016 adaptation of Witness for the Prosecution. However, accusations of sexual misconduct against one of the principal actors led to the mini-series being pulled before airing, and his scenes being re-filmed with another actor. It instead aired in April 2018, beginning Easter weekend.

Ordeal by Innocence was regarded by Christie as one of her two favourites among her own novels (the other being Crooked House).