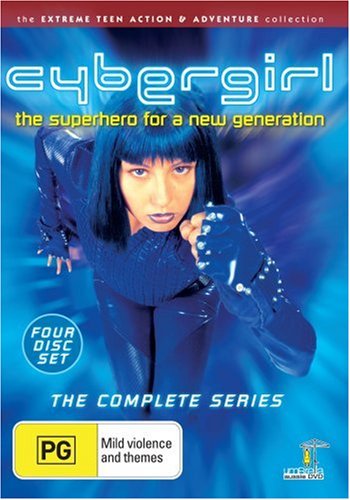 An Australian kids' TV show, created by Jonathan M. Shiff in 2001, about a robot alien gynoid who crashes on Earth. This alien, a prototype 6000 Cybernetic Human Replicant, has been (inadvertently) programmed with curiosity, and was kept away for fear that she could learn more than she needs to know. Apply Bellisario's Maxim here.

Anyway, the Cyber 6000 replicant, "Cy" (or "Cybergirl") is being closely followed by two more primitive replicants (the cold Xanda and the irritatingly dumb and unthreatening Isaac), and is forced to adopt the human disguise of "Ashley Campbell". But it's all for naught, as both she and the Series 3000 replicants run afoul of Corrupt Corporate Executive Rhyss (sic), whose state-of-the-art systems control the entirety of River City.

This series was filmed on location in Brisbane, with several prominent locations (the Powerhouse, South Bank and the Queen St Mall) thinly disguised. A giant set of screens was also added to King George Square, and features prominently.

You can watch the complete series in its entirety here