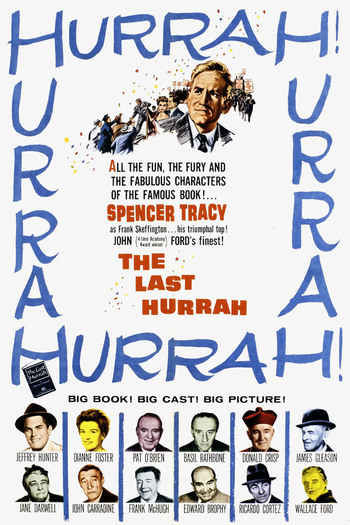 A 1956 novel by Edwin O'Connor, The Last Hurrah was adapted into a 1958 film directed by John Ford and starring Spencer Tracy.

The story concerns the Irish-American mayor of a big American city that bears a suspicious resemblance to Boston, Massachusetts, who wants to run for a fifth and final term before he retires. The mayor, Frank Skeffington, is "corrupt" in the sense that he likes to hand out personal favors in exchange for loyalty, but nonetheless seems to be a pretty decent person who genuinely cares for his constituents. The story is seen mostly through the eyes of Skeffington's nephew, local newspaperman Adam Caulfield, although the novel is written in the third person.

Of course, not everyone is enamored of Skeffington or his antics, and we're soon introduced to a number of people who would like to bring him down, including Caulfield's boss, newspaper publisher Amos Force; Bishop Gardner, a local Protestant clergyman; wealthy banker Norman Cass; Martin Burke, the city's Roman Catholic Cardinal, who thinks Skeffington is a walking embarrassment to Catholics and Irish-Americans alike; and Skeffington's own father-in-law, Roger Sugrue.

Hoping to stop him once and for all, some of Skeffington's foes find a candidate to run against him: a bland, boring, good-looking-but-not-too-bright young candidate named Kevin McCluskey, who is so unimpressive, in spite of his respectable war record, that even the Cardinal thinks he's a sure loser. Ordinarily, McCluskey (who bears more than a slight resemblance to a young John F. Kennedy) wouldn't stand a chance against a seasoned politician like Skeffington and his shrewd campaign manager John Gorman, but there's one thing that has changed the game this time out: television.

The story, which drew some of its inspiration from real-life Boston mayor James Michael Curley

, explores a lot of the issues surrounding mid-20th century urban politics in the United States. The New Deal had robbed the urban machine politicians of a lot of their traditional role in distributing public assistance, by making the Federal government responsible for it instead. Moreover, the advent of television meant that being good-looking and blandly inoffensive became more important than being a skillful politician who could command peoples' loyalty.

Tropes found in this novel/film include: