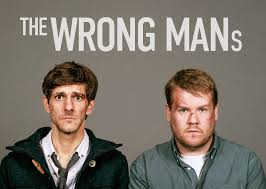 The Wrong Mans is a 2013 dark comedy / dramedy made for The BBC, which focuses on two well-meaning idiots who end up entangled in a world of crime. The protagonists are Sam Pinkett (Mat Baynton), an unambitious office worker in Berkshire County Council; and his friend Phil Bourne (James Corden), who works in the county building, but not for the county. Both of their lives take a turn for the interesting - yet also perilous - when Sam picks up a ringing mobile phone, and answers it, which serves only to draw him, and his friend, into a massive conspiracy of kidnapping, murder and sushi.

A second season has been ordered by BBC Two; Filming

began in August, 2014, as James Corden has a new job in America starting early next year, and both episodes aired in December 2014.