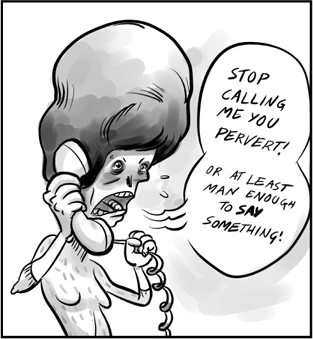 There's nothing more unnerving than receiving a unknown phone call in the middle of the night. Except, of course, receiving a phone call that consists of silence for a moment before you start to detect sounds of heavy breathing or fiendish laughter on the other end before the caller hangs up; the caller may even be an obsessive stalker that will keep calling you, even after you tell them to stop it. Sometimes there may just be a phone ringing and no one answers on the other line or someone just called and hung up without even talking.

Sometimes the voice initially sounds so charming and trustworthy that you can't help but strike up a conversation with the person. When this happens, the caller then switches their kind tone for a more menacing tone and you suddenly find yourself wishing that you had not answered the phone at all. Particularly when you find out that The Calls Are Coming from Inside the House.

Related to Evil Phone, when the case is more supernatural. Preferred tactic of the Evil Debt Collector, and it used to be common among marketers/salespeople, before they found spam. Prank Calls can easily become this, especially if the person on the receiving end gets multiple prank calls.