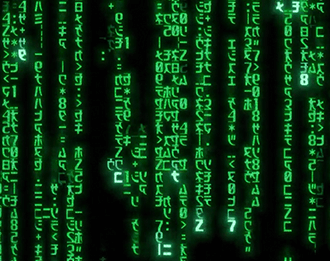 You can tell it's evil because it's Borg Green.
"I've been spending so much time with computers, your tears are just ones and zeroes to me."
— Abed, Community, "Repilot"
Advertisement:

That trippy, Cyber Green raining code in The Matrix that is constantly changing has pretty much become synonymous with high tech computing, VR environments, AIs, and Robots. Originally, it represented the ever changing nature of the Matrix and the overwhelmingly complex incalculability of it all. So when Neo starts seeing things in Matrix-Text-O-Vision, it represents him seeing and being able to manipulate the underpinnings of reality. Nowadays, it's mostly used to convey "Look, high-tech computer with arcane, indecipherably alien power and mentality!" or as a Stock Parody for The Matrix.

"Traditionally", the Raining Code will be green-on-black, flow from top to bottom, consist of normal letters and numbers with what looks like Japanese kana or other strange runes, and change text mid-fall. Newer adaptations will likely use a different color, direction for it to scroll, and text palette. Note that the original Matrix version used katakana characters and arabic numerals, mirror-flipped to obscure their shapes. The characters will generally leave 'ghosts' on the screen as they fall, reminiscent of old Apple II RGB monitors, symbolizing the Ghost in the Machine, of course.

Often displayed with Stat-O-Vision and in the Holographic Terminal. Compare Cool Code of Source and Design Student's Orgasm.