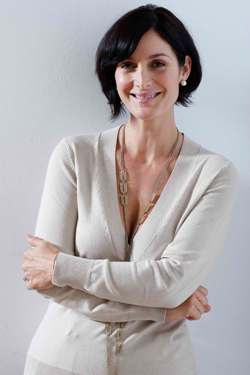 After The Matrix, I cannot wear sunglasses. As soon as I put them on, people recognize me.
Advertisement:

She is best known for her role as Trinity in the Matrix franchise, and Jeri Hogarth in the Marvel Cinematic Universe's Netflix franchise. She has also starred in the films Memento, Chocolat, Snow Cake, Disturbia and Unthinkable. She is married to fellow actor Steven Roy, with whom she has two sons and a daughter.

Tropes that apply to this actor's work include: