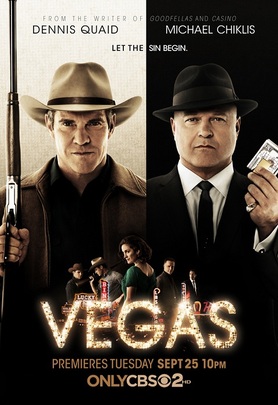 Whoever has the strongest influence can secure the future of Las Vegas.
Advertisement:

It's 1960 and Las Vegas is experiencing a major growth spurt. Mayor Ted Bennett is about to unveil his new vision for the city when he is informed that the governor's niece has been murdered and the sheriff is nowhere to be found. Desperate, the mayor asks that local rancher Ralph Lamb (Dennis Quaid) be brought to him. During World War 2, Lamb served as a military policeman and Bennet remembers how Lamb was able to catch a serial killer in Italy when the villagers were ready to hang an innocent man for the crimes. Bennet offers to appoint Lamb as deputy sheriff and put him in charge of the murder case. A reluctant Lamb accepts the job and recruits his younger brother Jack (Jason O'Mara) and son Dixon (Taylor Handley) to help him investigate. Assistant district attorney Katherine O'Connell (Carrie-Anne Moss) assists them with the case.

That same day Chicago mobster Vincent Savino (Michael Chiklis) arrives to take over the mob-run Savoy casino. He is a ruthless gangster with extensive experience running casinos and his Chicago bosses expect him to get their Las Vegas operations back into shape.

When the previous sheriff is found dead, the mayor tells Ralph Lamb that he is the new sheriff for law and order in Las Vegas and Clark County.