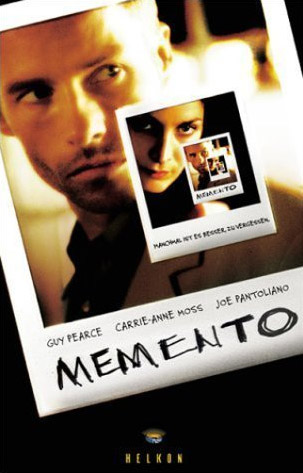 Memento is a 2000 neo-noir psychological thriller film written and directed by Christopher Nolan, and his first larger-scale production following his directorial debut Following.

Leonard Shelby (Guy Pearce) has a problem: during a robbery in which his wife (Jorja Fox) is killed, he suffers a blow to the head. The injury gives him anterograde amnesia — which means his brain can no longer record new long-term memories. He can remember the last five to fifteen minutes, and he can remember his life from before the injury, but everything in-between eventually...disappears. His life now consists of a hunt for John G — the person who killed his wife.

To find John G (and to simply function from day to day), Leonard employs a variety of reminders and notes to himself by way of Polaroids, tattoos, and other means both temporary and permanent. Of course, since he doesn't live in a perfect world, he comes across people who would love to help him find the killer — and take advantage of his condition in the process.

The film employs a unique timeline in that you see most of the movie in backwards chronological order (with distinctive anchor points allowing you to follow each scene), while sub-plot scenes of Leonard in a hotel (shown in black-and-white) run in chronological order to anchor the rest of the film. (As such, the film ends in the chronological middle of the overall narrative.) This editing choice creates a mood and a storytelling method intended to match Lenny's condition.