Spoilers for all The Matrix works preceding this one will be left unmarked. You Have Been Warned! 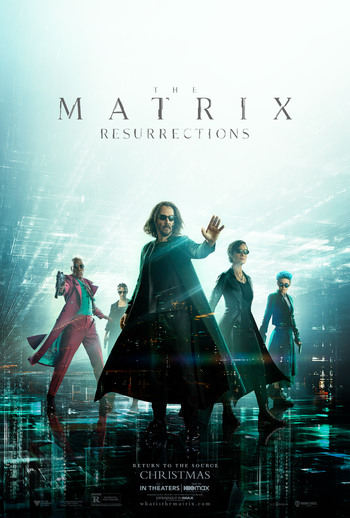 "Could be this is the first day of the rest of your life. But if you want it... you gotta fight for it."
"I know you said the story was over for you, but that’s the thing about stories. They never really end, do they? We’re still telling the same stories we’ve always told, just with different names, different faces and I have to say I’m kind of excited. After all these years, to be going back to where it all started... back to the Matrix!"
— Smith
Advertisement:

The Matrix Resurrections is an American Cyberpunk Science Fiction action film directed and co-produced by Lana Wachowskinote Her sister and regular collaborator Lilly, who worked on the first three films and various spin-off projects, chose not to participate, who co-wrote the script with Aleksandar Hemon and David Mitchell. The third sequel to The Matrix and the fourth film installment in The Matrix franchise, the film was released on December 22, 2021, both in theaters and on HBO Max (the latter for a one-month duration), over 18 years after The Matrix Revolutions.

Set several years after the end of the Machine War, things have returned to a state of familiarity in the Matrix, though the simulation's technology has progressed to reflect a more advanced society. Neo, once thought to be dead, has returned to his Thomas Anderson persona and lives a fairly normal and humdrum life working as a game designer, having helmed the development of the successful and award-winning Matrix video game trilogy.

While facing pressure to make a fourth installment in the series from higher-ups, he begins to realize that the allegedly fictional events portrayed in his games are actually memories from his past life. When familiar faces and their new allies seek out his assistance, it's time for Neo to take a trip down the rabbit hole once more...

The Matrix Resurrections contains examples of:

open/close all folders
#-F
G-O
P-Z
Trinity: Before we got started, we decided to stop by to say thank you. You gave us something we never thought we could have.
The Analyst: And what is that?
Trinity: Another chance.
Feedback

Matrix Resurrections discusses its own reboot.

Matrix Resurrections discusses its own reboot.