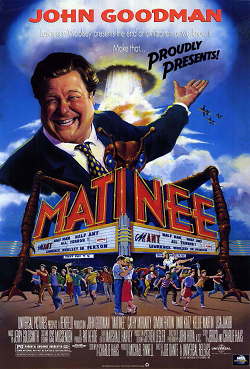 "Grownups don't know what they're doing either, kid. That's the real hustle."
"Once you let that atomic genie out of its bottle, there's no turning back, gentlemen!"
— Dr. Flankon, MANT!
Advertisement:

Matinee is a 1993 Dramedy film directed by Joe Dante. Set in Key West, Florida during the Cuban Missile Crisis, Gene and his little brother Dennis live on the military base with their mother while their father is deployed in the Navy. Amidst the growing paranoia of the impending nuclear destruction, movie producer Lawrence Woolsey (John Goodman) comes to town to premiere his latest creature feature MANT! and uses his unique brand of showmanship to play off of people's fears.

as a Cult Classic.