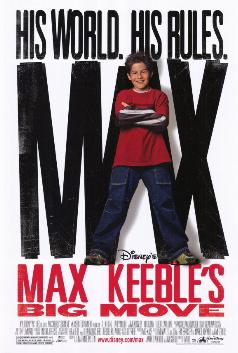 It's Max Keeble's first day of junior high, and things are going badly. Over the course of the day, he is accosted by not one, not two, not three, but four separate bullies: an evil Ice Cream man, a thuggish brute, an entrepreneurial lunch-money thief, and the malevolent (and stupid) school principal Jindrake, who wants to pave over an animal shelter so he can build a football stadium. To top it all off, when Max gets home, his dad announces that his Mean Boss has assigned him a new post in Chicago: By the end of the week, the family has to move.
Advertisement:

Max is depressed at first but quickly realizes that with no fear of retribution, he can exact revenge on the bullies. He and his best friends Robe (a chubby kid who always wears a robe) and Megan organize a series of zany plots to give the bullies what's coming to them. Of course, this being the movies, things don't go exactly as planned, and Max eventually has to fix what he's broken and stand up to his oppressors once and for all.

A live action Disney flick from 2001, directed by Tim Hill (who went on to make the CGI Alvin and the Chipmunks) and co-written by Jonathan Bernstein (who went on to write the novel Hottie). The characters and plot are very predictable, but it's got some witty lines and great performances, especially from its young actors and Larry Miller, who serve up several slices of Large Ham.