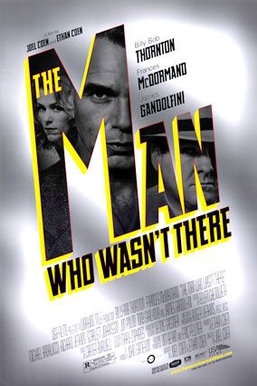 "A movie about a barber who wants to be a dry cleaner."
— The pitch for the movie.
Advertisement:

There is a totally emotionless barber named Ed Crane. It's 1949 and a bald man, Creighton Tolliver, has some sales pitch about "Dry Cleaning". Ed's wife, Doris, is having an affair with her boss, "Big" Dave Brewster. Ed decides to blackmail the pair to pay for a silent partnership. When Mr. Tolliver asks Mr. Brewster for the same amount of money for which he was being blackmailed, Mr. Brewster finds Mr. Tolliver and beats the whole story out of him. From there, things spiral out of control.

Not to be confused with the 1983 comedy film starring Steve Guttenberg.