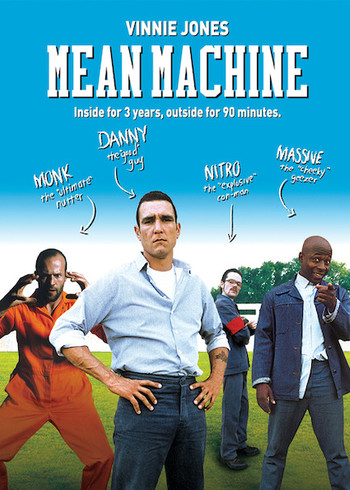 It's Not Just About Football, It's About Pride Inside!
Advertisement:

After getting arrested for drink-driving and assaulting a police officer, former England football captain Danny "The Mean Machine" Meehan is sent to Longmarsh Prison for three years. Shortly after arriving, he is brought to the governor who wants Danny to train the prison wardens' amateur football team. Danny, however, proposes to instead assemble a team made up of his fellow convicts to play against the guards.

Although it bears some similarities to Escape to Victory, it is in fact an adaption of the American film The Longest Yard, where the central sport is American football instead of association football.

Nothing to do with Dick Dastardly's car.