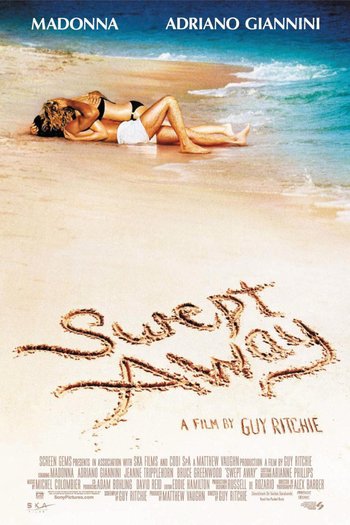 Swept Away is a 2002 romantic comedy film written and directed by Guy Ritchie. The film is a remake of Lina Wertmüller's 1974 Italian film released in English under the same name,note Its original title in Italian is Travolti da un insolito destino nell'azzurro mare d'agosto ("Swept Away by an Unusual Destiny in the Blue Sea of August") and stars Ritchie's then-wife Madonna.

Amber Leighton (Madonna) is a beautiful, spoiled, foul-mouthed, and arrogant rich woman. Nothing makes her happy, including her wealthy but passive husband, Tony (Bruce Greenwood), a pharmaceutical kingpin. When Tony takes her on a private cruise from Greece to Italy with two other couples, Amber is unimpressed by this impromptu no-frills vacation and takes out her anger on the ship's first mate, Giuseppe Esposito (Adriano Giannini). When a storm leaves the two shipwrecked on a deserted island, however, the tables suddenly turn, with Giuseppe gaining the upper hand, followed by the two falling in love.