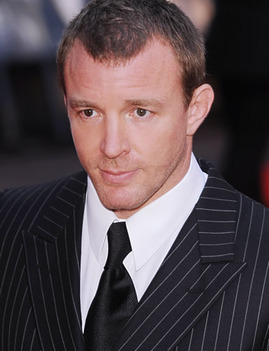 His first film, Lock, Stock & Two Smoking Barrels was a low-budget, humorous crime caper about the London underworld. It was an indie success and critical darling for its fresh, vibrant style.

He followed up with Snatch., which was an even bigger success, though some critics complained that he was rehashing his previous film too much. Next, he made Swept Away, a remake of a controversial 1970s Italian film, starring his then-wife Madonna.

Swept Away was savaged by critics, and bombed at the box office. When he returned to familiar territory with the crime caper Revolver (2005), he tried to mix things up with an Evil Plan and an Anvilicious Aesop. The film was so poorly received that it didn't even see wide release in America.

Ritchie then made RocknRolla in an obvious attempt to recapture the violent and irreverent underworld hijinks of his first two films. It was received better than Revolver, but wasn't really a success. He seemed to be approaching the nadir, but his adaptation of Sherlock Holmes appears to have revived his fortunes; it received mostly positive reviews, and was successful at the box office, grossing more than all of his previous films combined. The sequel, Sherlock Holmes: A Game of Shadows was equally successful. He also produced the TV series SWAG.

In 2019, after two consecutive box-office bombs, he rebounded with, of all things, the live-action remake of Aladdin, which has become the biggest hit of his career. In 2020, he returned to crime comedy with The Gentlemen, and has since reunited with his former leading man Jason Statham on two further films.

Example of:
Fed to Pigs