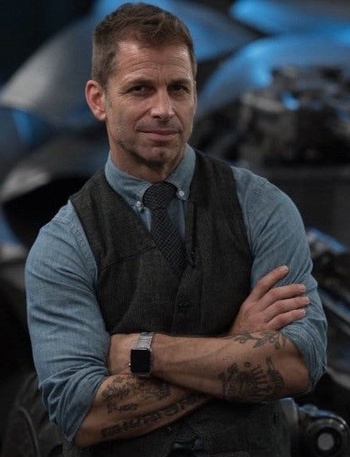 "I think I just have a natural operatic aesthetic. I can't help it."
Genres:
Influences:
Advertisement:

He is well known for his stylized action movies in which he displays his love for details, crisp cinematography, slow motion sequences and dark and gloomy color filters, and for creating almost shot-for-shot adaptations of comic books such as 300 and Watchmen.

His biggest directorial challenge to date undoubtedly has been to kick-start the Warner Bros./DC Comics shared movie universe commonly referred to as DC Extended Universe (DCEU), starting with the Superman reboot Man of Steel in 2013 then Batman v Superman: Dawn of Justice in 2016. He then exited Justice League in the middle of the post-production work in May 2017 after the death of his daughter Autumn in March of that year. After almost three years of speculation and fan campaigns, his version of the film was eventually released on HBO Max in 2021. His direct collaboration with Warner Bros. has ended although and his wife Deborah are still co-producing films in the DCEU setting via their company, The Stone Quarry (formerly Cruel and Unusual Films, renamed in 2019).

He has since struck big deals to provide content for Netflix, including Army of the Dead (his second non-adaptation, which also marked his return to the Zombie genre and spawned a franchise), a Norse Mythology-inspired animated series titled Twilight of the Gods (to be directed by Jay Oliva), a film titled Horse Latitudes (about a veteran war photographer who teams up with a soldier to find the murderer of a diplomat and his family) and Rebel Moon (a Space Opera). He is also interested in adaptating the Ayn Rand novel The Fountainhead and the Arthurian Legend.

He is not related to comic book creator Scott Snyder, but has mentioned him among his inspirations for his DCEU films. There were even brief plans for Scott to bring Zack's original vision for the DCEU post-Justice League to comic book form in compliments to the release of the long-awaited Snyder Cut, but ultimately didn't go through.

open/close all folders
Films he directed:
Other Works Snyder is credited in: