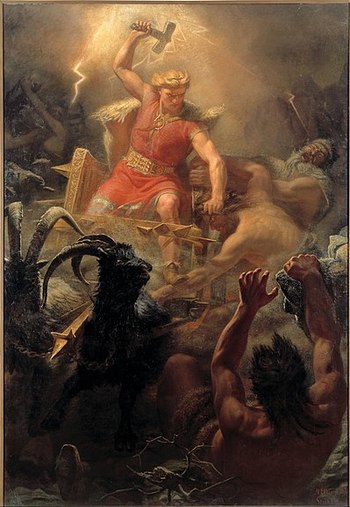 Can't touch this.
"Hearing I ask | From the holy races
From Heimdallr's sons | both high and low;
Thou wilt, Valfather | that well I relate
Old tales I remember | of men long ago."
—The Voluspa, Stanza 1
Advertisement:

In the beginning, there were two worlds. Niflheim, the world of utter cold, and Muspelheim, the world of blazing heat. In the middle of the heat and cold, there was Ginnungagap, the great void, and the place of utter chaos. At the center of Ginnungagap, the heat and cold combined to form a "creating steam". Water flowing from the poisonous streams of Niflheim coalesced here to create Ymir, the first jötunn, or giant. From his arms he created a man and a woman, and from his legs created a monster. The gods Odin, Vili and Vé fashioned the earth from his flesh, his blood became the oceans, from his bones came the hills, his hair brought forth the trees, his brains formed the clouds, from his skull rose the heavens, and from his eyebrows the middle realm in which mankind lives, Midgard. And thus the stories of gods, giants, men, and many other creatures besides begins.

The Norse Mythology is a collection of stories derived from Germanic roots, following the lives of the Norse gods — the Aesir and the Vanir — and the men whose lives they directly affected. At its height, the mythology covered most of Northern Europe, much of modern Germany and Austria, and parts of the British Isles; it lasted longest in Scandinavia and Iceland, however, which produced most of its surviving texts. It is a branch of the Proto-Indo-European mythological tradition, which also spawned the Celtic, Greek, and Vedic pantheons; it's distinguished from those myths, however, by the fact that its gods are not only fallible, but also all mortal. They could, and did, die. Like most traditional polytheistic systems, it has no set canon and in some ways resembles a body of customary beliefs more than a set religion. It has been speculated that only chieftains and other wealthy people held faith in the Aesir, while the common farmers believed in land-spirits such as trolls and giants.

Many texts describing Norse beliefs have come down to us, but, aside from a few runic inscriptions and similar fragments, all were written at least a century after the turn to Christianity. Consequently it's nearly impossible to tell which stories are Hijacked by Jesus, or how much they are, although academic theories abound. Even ignoring this, another problem arises: since Norse myth has no definitive canon, the myths differ considerably from place to place, according to the time and the purpose for which they were written.

For most researchers, the main source of canon is the Poetic Edda, also known as the Elder Edda or Codex Regius (as it was originally known). This is a collection of both mythological and heroic poems; the most famous, the Völuspá, relates the past creation of the world, the future death of the gods and burning of the world, and the beginning of the world to come. Others give pithy advice (Hávamál) or contain legends of the Aesir and the Vanir, while even more tell us about the heroic deeds of human beings. Perhaps the most important hero is Sigurd Fafnesbane, a man cognate to the Siegfried of German legend. The oldest surviving copy of the Elder Edda was made in the late 13th century, though many of its poems are much older than that; though how much is often quite unknown.

A secondary source of canon is the Prose Edda (a.k.a. Younger Edda, Snorri's Edda or just plain Edda), a book that was written by the Icelandic historian and politician Snorri Sturluson sometime around 1225 CE. It's difficult to accurately summarize his book; it's believed to have begun as a simple collection of skaldic poetry, but as Snorri wrote, he's thought to have realized that most of his audience would miss many important mythological allusions. Drawing upon his vast knowledge of Norse mythology, therefore, he devoted half his book to retelling the myths in an educational manner, sourcing both older sagas and the Poetic Edda. It's likely that Snorri didn't intend this mythological content to be taken at face value: The prologue and the end of the first section explicitly state that the work covers ancient, mythologized kings and heroes rather than true divinities. In fact, Snorri's not-at-all mythological book Heimskringla (which retells stories of the Norwegian kings) contains a similar prologue, and it even mentions the events of the Prose Edda in passing.

Various other sources exist, including The Icelandic Sagas and Saxo Grammaticus' Gesta Danorum, a Danish work of history compiled in the late 12th century. All are, for one reason or another, generally considered less authoritative than the Eddas. The works of the Roman ethnographer Tacitus touch on an earlier form of Norse myth, similar in many ways but dating to the first century CE. The current versions we have, however, are Older Than Print.

It's important to note that the Norse gods are usually considered to be derived from the same ancestral Indo-European mythology as Classical, Celtic, and Hindu Mythology. The mythology of Zoroastrianism is also similar, although with a henotheistic structure imposed on it.

Incidentally, we still honor some of the Norse deities on a regular basis (though we use the Anglo-Saxon versions of their names): Sunna's Day; Máni/Moni's Day; Tyr's, or Tiw's, day; Odin's, or Woden's, day; Thor's, or Thurs's, day; and Frigg's day.note In case you don't get it, these days are known also as Sunday, Sunna being the sun; Monday, Máni being the moon; Tuesday; Wednesday; Thursday; and Friday — followed by Saturn's day Each occurs once a week in cultures that use the Germanic root names.

Norse Mythology survives to this day as the basis for Heathen, Ásatrú, and Theodish (etc.) mythology. In Scandinavia, the conversion from this faith to Christianity never fully replaced belief in Norse God/desses. Sources from the 17th century suggest that Odin was still believed to be a protector of horses. In the 1950s, studies showed that some people in Sweden still believed in Norse Mythology, although they did not worship the God/desses. Modern day Scandinavians and Icelanders that worship the Norse God/desses are called "new heathens" and refer to their faith as "the Old Creed" and the deities as "the Old Gods."

By the way, note that this page is called Norse Mythology, not Viking Mythology. Originally, the word "viking" meant the act of faring overseas and the sailor participating, while in English it denotes a profession meaning something like "pirate". Only a minority of Norsemen were Vikings.

Works on the wiki that constitute Norse mythology:
Literature
Works based on (or including elements of) Norse Mythology
Anime & Manga

Trope Namer of the following: