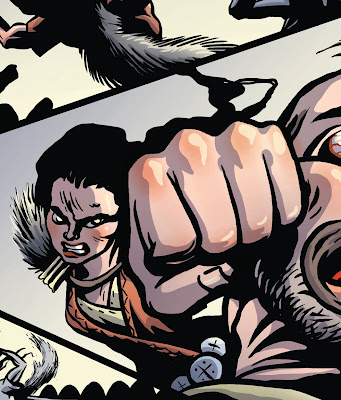 Vei is a Swedish Sword and Sorcery comic book series written and drawn by Karl Johnsson with Sara Bergmark Elfgren as co-creator.

The story opens with a group of Vikings in search of Jotunheim — the legendary home of the giants. All of a sudden the happen upon the lifeless body of a young girl in the water. Some of the crew members who have been driven mad from starvation, discuss wether to kill and eat her but are taken by surprise as the girl lashes out, killing one of the men. Turns out the girl's name is Vei and she claims she can show the men the way to Jotunheim. An "arrangement" is thus made: Vei will lead the way or she will be killed as a sacrifice to Odin. When they arrive in the alleged Jotunheim, the men first think themselves betrayed and prepare to perform the sacrifice - until a giant blue creature emerges from the mountains, kidnapping all of the Vikings except Vei and Dal, Prince Eidyr's right hand man.

What follows is and adventure that will pit Man against God and God against God.

Vei was serialised in Utopi a Swedish Anthology Magazine for Science Fiction, Fantasy, Horror and Erotica and latr released in hardcover album form.