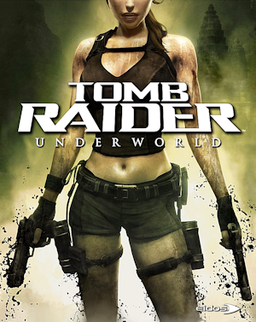 "I only want the truth, whatever it may be."
The Doppelgänger: "Obsession and Compulsion are much the same, either way we are, neither of us, our own masters."
Advertisement:

Tomb Raider: Underworld was released in 2008 and is the ninth entry in the Tomb Raider series. It is the last game of the first Crystal Dynamics trilogy that started with Legend; after the release of Underworld, the series was rebooted a second time with Tomb Raider (2013).

Set a some time after the events of Legend, Lara Croft is now searching for Avalon, a mythical place where she believes she might find her missing mother. Thanks to a clue given to her by one of her late father's friends, she manages to pinpoint a location in the Mediterranean Sea, unwittingly stumbling upon the remains of some ancient Norse ruins and, more importantly, one of the gauntlets of Thor, the god of thunder. After an unlikely source informs her that Thor's hammer is the key to unlocking Helheim, the place where her mother was sent to, Lara descends into the underworlds of various ancient cultures. Determined to solve the mystery of her mother's disappearance once and for all, she sets out to collect Thor's gauntlets, belt and hammer, simultaneously making sure she stays one step ahead of her nemeses.

The locations she visits during the game include ruins beneath the Mediterranean Sea, Coastal Thailand, her own home, Croft Manor, the jungles of Southern Mexico, Jan Mayen Island, a ship in the Andaman Sea and finally, the Arctic Sea.

Underworld attempts a sort of combination of Legend and Anniversary, with the narrative integration of the former and the level design, isolation and other aspects from the latter. The storyline itself receives a bit of a helping of Darker and Edgier, though its success is arguable. Although its graphics are top-notch, the game has received quite mixed reviews, partially due to being obviously rushed out for Christmas. Many felt that the game was let down by of its various bugs and issues, its camera from hell being particularly noteworthy. Some overlooked those issues, or got lucky, and considered it one of the best in the series, others were completely put off by them or ended up with an overall impression more along the lines of So Okay, It's Average. Two additional chapters were later released as Downloadable Content that was exclusive to the Xbox 360, which is still something of a sore point for the rest of the fandom.