Literature / Magnus Chase and the Gods of Asgard 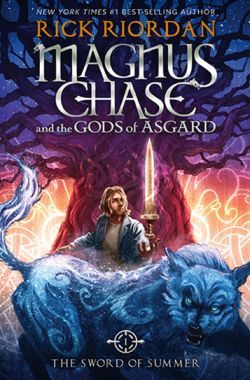 Two years ago as the wolves were breaking into their house, Magnus' mother told him to run. Since then he's been hiding as a homeless boy on Boston's streets while avoiding police and truant officers. Now, however, his uncle Randolph, who his mother always told him to avoid, is looking for him whilst bumbling something about incoming Ragnarok, wolves and Magnus being a child of god. Despite Magnus wishing nothing more than to escape all the incoming insanity he's pulled into the world of Aesir, Vanir and giants and is forced to take up arms and fight.

The series is a trilogy, consisting of the following books:

Two companion books have also been released, one guidebook and a collection of stories set post-series: