The Baby of the Bunch 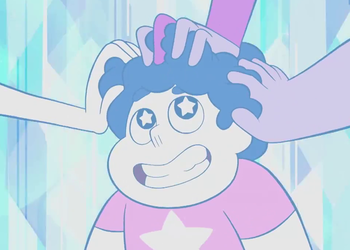 Affectionate gestures to the head are common.
Max: The Von Trapp Family Singers. Here are your names [from eldest to youngest]: Liesl, Friedrich, Louisa, Brigitta, Kurt, Marta and Gretl.
Gretl: Why am I always last?
Max: Because you are the most important.
— The Sound of Music
Advertisement:

Being the youngest of your group typically comes with some perks and challenges. On one side you're probably the cutest, have a pass to act immature, people like taking care of you, and you can embrace your fun side, knowing that the elders are there to handle the serious stuff. And if there's anything you're naïve about, you have plenty of others to give you the realest unfiltered advice without the generational gap and detachment that your parents or the Old Master have.

On the other end, sometimes people don't take you seriously. There you're kinda stuck because no matter how old you get, you'll always be "the baby" in their eyes.

Embrace the fun side too much and expect a lecture about growing up. Even worse, "acting your age" if you're an adult.

This role is usually played up in Sibling Team dynamics, and musical groups. Compare Middle Child Syndrome and other Sibling Tropes that can conflate with this.

According to The Birth Order Book: Why You Are the Way You Are, Dr. Kevin Lenman describes the last-born children as "social and outgoing" but also the "most financially irresponsible of all birth orders". He also commented that they have the potential to be manipulative as well as charming, and, finally, be sometimes prone to Never My Fault and Attention Whore moments.

Contrast Tag Along Kid, who is usually literally a child, rather than this character who is metaphorically a baby. For reference, the baby is usually at the youngest end of their group's Competence Zone. The kid is young enough to be outside of the zone, and under normal circumstances wouldn't be expected to even be on the team. Contrast Team Dad and Team Mom, who are characterized by their maturity within a minor age range.

Tends to overlap with Kid-Appeal Character and The Cutie. Sometimes rendered as a Token Mini-Moe. Compare New Meat and Young Gun in professional settings. Occasionally can be seen as a supertrope to The Runt at the End and Youngest Child Wins as the baby tends to favored by characters, writers or fans in real life. Everyone's Baby Sister is this trope used as a plot device to motivate other characters to protect them.