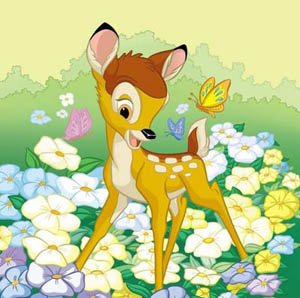 Total Badass.note Seriously, he does become a total badass.
Smalls: Oh. Yeah, the Great Bambino! Of course! I thought you said the Great Bambi.
Ham: That wimpy deer?
—The Sandlot
Advertisement:

There's something about deer.

◊ is a map indicating their natural habitat. Perhaps the buck's antlers reminds us of a king's crown. Perhaps it's just because they were (and still are in many places) a staple of humanity's diet in the Northern Hemisphere and therefore became a key figure in folklore (Carnivore Confusion is nothing new). In any case, in older fiction, deer are often employed as a symbol of nature in general and forests in specific. All well and good.

In much of today's fiction, however, something got seriously lost in the translation. Somehow, deer became symbols of innocence and all that is pretty and sweet in nature. Therefore, if you want to show the death of something innocent to make some sort of point or other, you kill a deer. The examples of this trope speak for themselves (see below) and it has gotten to the point where it can barely be taken seriously; this trope is a rich vein of Narm.

The Trope Namer (unrelated to the term used by some critics of vegetarianism to describe how they see the vegetarians' philosophy) is a term used offhand to criticize this trope in Douglas Coupland's novel Generation X. What's especially bizarre is the fact that Bambi is often accused of spreading the idea that "deer are innocent". If you feel this way, please go and watch the movie again. In actuality, the film does not shy away from the "Deer can be Bastards and, Really, Sometimes You Can't Blame Them" / "Nature Is Not Nice" world of Felix Salten's original novel (which, needless to say, is a bit closer to reality). Bambi himself goes from cute little fawn to Badass Prince who kicks (antlers, rather) butt for love. The midquel is no slacker on this either; all you need is one word: Ronno.

For an older tradition where deer are mysterious and magical creatures, see The Marvelous Deer. One notable exception to this trope is moose, which are more likely to be portrayed as bumbling buffoons or dumb brutes. Also contrast Wendigo, whose recent portrayals are a creepy subversion of this trope.

As far as how this trope has affected Real Life... let's... not even go there. We don't want this to turn into Complaining About Hoofed Mammals You Don't Like.

Deer are a menace when cars are in use. They're "edge animals," suited to environments where forests transition into grassland, like suburbia; they also can't gauge the speed of anything going over 40 miles an hour, but they think they can. And, they have no particular fear of cars. Between these three factors, deer kill more people than any other large land animal: all those traffic accidents add up. (Drive carefully, especially in the evening and at night.)

If deer happen to give you problems in your backyard, there are easy ways

to thwart them; in particular, plant sage and onions, which they don't like the taste of. (Onions will also teach squirrels not to go digging for your tulip bulbs.) Alternatively, install The Thing That Goes "Doink". The more you know!

In some ways, however, some species of deer can be seen as Cool Pet when in the hands of a rightful owner, similar to a big wild cat being owned by a Kindhearted Cat Lover.

See also Children Are Innocent, Humans Are the Real Monsters, Improbable Infant Survival and What Measure Is a Non-Cute?.