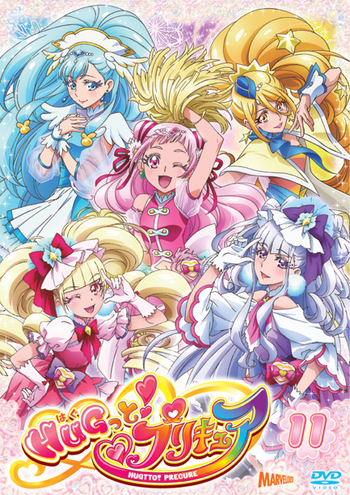 Clockwise from top left: Cure Ange, Cure Etoile, Cure Yell, Cure Amour, and Cure Macherie
"You can do anything! You can become anything! Embrace the sparkling future!"
Advertisement:

Hugtto! PreCure is the fifteenth entry in the Pretty Cure franchise, commemorating the franchise’s 15th anniversary and the last entry fully produced in the Heisei era. It is the thirteenth separate continuity in the series and began airing in February of 2018.

Hana Nono is a second-year middle school student who aims to become a stylish, mature big-sister-like figure. When she realises she is late for her first day of school, she cuts her bangs in a hurry, causing her hair to look like a mess!

However, there's a nice turn of events when she meets Hugtan and her guardian, Harry, who had fallen from the sky. But suddenly, the Criasu Corporation appears in hopes of stealing Hugtan's Mirai Crystal, so they create a scary monster to attack them!

With her strong desire to protect Hugtan, a new Mirai Crystal appears and transforms Hana into the Pretty Cure of High Spirits, Cure Yell. The Mirai Crystals are a crystalized form of Tomorrow Power, the magical power overflowing this world that creates a shining future for everyone. If it's stolen, everyone's future will disappear, including Hugtan's future.