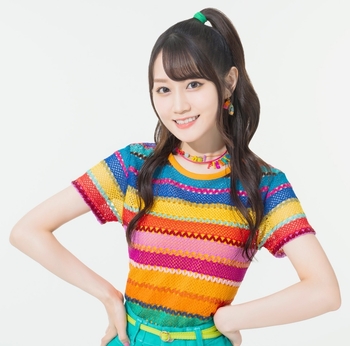 Yui Ogura (小倉 唯) (born August 15, 1995) is a voice actress and Idol Singer from Gunma prefecture, Japan. She is a former member of the Idol unit StylipS, and part of RO-KYU-BU! unit with her co-stars of the anime with the same name. She's been typecast as the Token Mini-Moe. Also tends to be a little sister. You should half expect Kaori Ishihara, her partner in the singing duo YuiKaori, to be in the same anime.
Advertisement:

YuiKaori disbanded at the end of June 2017 so the two of them could focus on their individual music careers, and academics for Ogura as she was still in university at the time. Ogura graduated from Showa Women's University in March 2018 with a bachelor's degree in psychology, which she celebrated in the release of a photobook in May of that year

Not to be confused with Airi Ishihara, a voice actress more active in the eroge business, who is most often credited with the same name as her, but with differing kanji in their given names (結衣).