Take This Job and Shove It 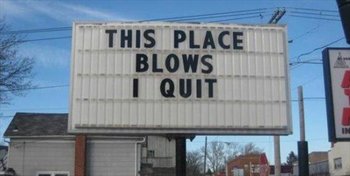 Now that's what I call a resignation notice!
"Ya'll better not try to stand in my way
As I'm walking out the door
Take this job and shove it!
I ain't workin' here no more!"
— Johnny Paycheck, "Take This Job and Shove It"
Advertisement:

A character is in a job that's making them more and more miserable by the day. Never mind that it's their (probably only) source of income; the plain and simple of it is, the job sucks and is draining them of their energy and patience.

Maybe it's a Dangerous Workplace they're employed to. Maybe they're working for Incompetence, Inc. Very possibly, there's No Such Thing as H.R. Perhaps they have perpetual insecurity about how safe their job is, and it's not helped by the overbearing supervisor or office manager they've got. Maybe they just recently got Promoted to Scapegoat or have to put up with an incompetent boss. It could be that they're the Beleaguered Assistant, or the Only Sane Employee in an office populated by those who should rightly be certified insane. Or, chances are good they've been subjected to the Delegation Relay one time too many. Or perhaps the boss is a Corrupt Corporate Executive and the character's morals can't allow them to stick around that kind of environment.

The reasons vary, but the result is the same. Resentment builds... Tranquil Fury is fostered... and then the character's patience goes flying out the window.

"You know what? TAKE THIS JOB AND SHOVE IT!"

The recipient may be a Jerkass who thoroughly deserved it. The employer/supervisor may also be a parent or relative or somebody who's SUPPOSED to be a good guy.

Note that it doesn't have to be the word-for-word line of this trope's title that is said; the manner of Rage Quit displayed against the supervisor/boss is essentially the heart of the trope.

Be careful, though; if done too often, it may lead others to query why you always leave one job after another (in which case, it might be you who has the real problem). If the person goes on a violent rampage instead of simply quitting, that's Going Postal. If they have to return humbly, that's Crossing the Burnt Bridge.

Compare Screw This, I'm Outta Here (for a range of situations that may or may not involve one's job), Rage Quit (for angrily quitting a game rather than a job), and Insignia Rip-Off Ritual (for examples of quitting or being fired that are symbolized by destroying an icon related to the job). May involve a "Reason You Suck" Speech. A subtrope is Resign in Protest, where a specific action or decision by their organization leaves someone feeling unable to continue doing the job in good conscience and leaving as a form of protest. If the person is forbidden from leaving or is forced back in not of their own accord, it's Resignations Not Accepted or Mandatory Unretirement.

Not related to To Hell with This Infernal Job, though the subject of that trope may very well be feeling this way when they quit their own job.

Severine, one of the Emperor's Coven scouts, angrily quits her post after spending the entire episode enduring Adrian Graye's harsh criticisms of her.

Severine, one of the Emperor's Coven scouts, angrily quits her post after spending the entire episode enduring Adrian Graye's harsh criticisms of her.