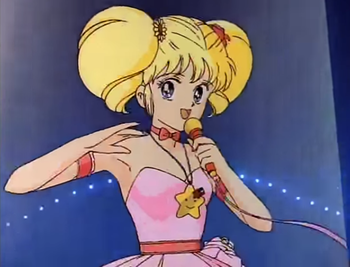 Idol Densetsu Eriko a.k.a. "Legendary Idol Eriko" is a 1989 Shoujo Idol Singer anime produced by Ashi Productions and Big West note  The same advertising agency known for their involvement with the Macross franchise and broadcast on TV Tokyo.

Eriko Tamura, the only daughter of a very famous couple, Kousuke Tamura, the chairman of Tamura Productions (renowned music company) and his wife Minako (a former famous idol singer) Having a talent for singing since birth, she has always loved her parents' media world. Then one day, tragedy strikes when her parents get into a horrible car accident, which kills her father, and leaves her mother in a coma. She is left in her father's best friend, Mr. Uchida's care.

Now, Eriko must take the path of singing, a path her parents did not want her to pursue, while her Evil Uncle, Yuusuke, is out to destroy her career. But in spite of all the hardship, she becomes an idol and wins hearts all over Japan.

Idol Densetsu Eriko was adapted into Arabic, French, Italian and Spanish, but has yet to see an official English release.