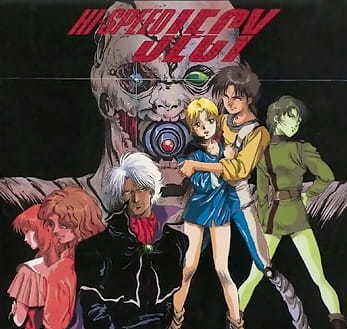 Hi-Speed Jecy is a 12-part OVA series released on the VHS and laser videodisc formats beginning in 1989.

The story centers on a superhuman young man, Jecy Moore, his sister Tiana, and warrior priest Falk Green as they're asked to be bodyguards for a mysterious woman named Telaine Bismarck. Turns out, she's got connections to some shady people, with one in search of immortality, one with killer brains, and one who is a total psychopath. The adventure really kicks off when Tiana is abducted by the Bismarck crime family to force Jecy to do their bidding, and the experience brings back memories of a dark incident from his past...

Streamline Pictures was supposed to produce an English dub for VHS release in 1996, but problems with its distributor put the kibosh on that, and the series remains commercially unavailable outside of its native Japan to this day.

This OVA series contains examples of: