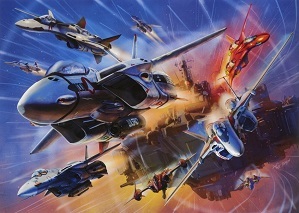 And that's just what they look like before transforming.
Advertisement:

The Macross franchise is a long running anime series created by Shoji Kawamori with designs made by Kazutaka Miyatake and Haruhiko Mikimoto. Along with Space Battleship Yamato and Mobile Suit Gundam, it's considered one of three unassailable pillars of anime Space Opera. The general plot of each series concerns a conflict waged with Transforming Mecha (and usually involving aliens). In the middle of it all, The Power of Rock comes into play, as does the Power of Love, thus forming the three main elements of Macross: Humongous Mecha, superpowered music, and Love Triangles.

The first show, Super Dimension Fortress Macross, first aired in 1982 under the Mainichi Broadcasting System. Since then, it has led to numerous sequels (both anime television series and OVAs), mangas, and video games.

The Macross franchise is the Trope Namer for:

Tropes applying to the franchise as a whole: