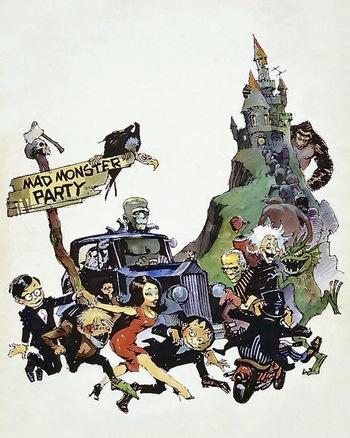 Produced by Rankin/Bass and released in 1967, the Stop Motion puppet animated (called "Animagic") feature-length film Mad Monster Party? is a get-together of many classic monsters, as designed by MAD cartoonist Jack Davis.

The brilliant and devious Baron von Frankenstein (voiced by Boris Karloff), creator of the Monster (voiced by Alan Swift) and his Mate (voiced by Phyllis Diller), has concocted a vial of potion capable of destroying matter. Delighted by his latest success, the Baron decides to retire while still the best, and invites nearly a dozen monsters to the Isle of Evil for a party. There, at the party, he intends to retire as head of the Worldwide Organization of Monsters, and hand over the position, and the secret of destruction, to his nephew, the nerdy Felix Flanken (also voiced by Swift). Attending the party, in addition to the Monster and his Mate, are Count Dracula, The Hunchback of Notre Dame, The Invisible Man, the Creature from the Black Lagoon, Dr. Jekyll and his alter-ego, the Werewolf, and the Mummy (all voiced by Swift). Also present are the Baron's assistant, the attractive redhead Francesca (voiced by Gale Garnett); and the "zombie" butler Yetch (yep, Swift again), who is obsessed with her. Not invited to the party is a monster the Baron only identifies as "It", who, in the climax, is revealed to be none other than King Kong. Needless to say, when the monsters discover the Baron's plan to entrust his secrets with Felix instead of one of them, they are outraged. Hilarity and chaos ensue.

The film was under-promoted and did poorly in its initial theatrical release, but has since become a Cult Classic. Five years later, in 1972, Rankin/Bass would give the film an unofficial (and somewhat illogical) prequel of sorts, Mad, Mad, Mad Monsters, a traditionally animated TV Movie for the anthology series ABC Saturday Superstar Movies, using most of the original Jack Davis character designs, though dropping Phyllis Diller for a "Monstress".

Although obviously meant to evoke it, the film has no official ties to the Universal Horror franchise, even in the same loose-continuity way as Abbott and Costello Meet Frankenstein. Not to be confused with the crime biopic Party Monster.

Today, Mad Monster Party? is considered by many to be the precursor to The Nightmare Before Christmas.