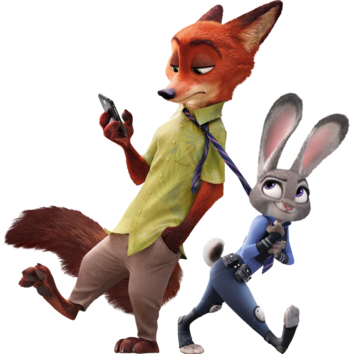 Wherever she's taking him, it's not the shoe store.
"I hate bullfights! I never eat beef! I'm a vegetarian! I don't even wear shoes!"
— Roger Rabbit, "Rollercoaster Rabbit"
Advertisement:

Funny Animals have differing levels of clothing, sometimes even between different characters in the same work. You've got your Accessory Wearing Cartoon Animals, who are basically naked except for one or two token items. There are also Half Dressed Cartoon Animals, who wear a shirt or pants, but not both. There are even Fully Dressed Cartoon Animals who have complete outfits. And then there's the subject of this article — cartoon animals who are almost fully clothed by human standards, but who, for whatever reason, go barefoot (or bare-pawed, if you want to get technical). These are furry characters who don't just remove their footwear for specific occasions (like sleeping or swimming), but go barefoot all the time, even during activities where humans would normally wear shoes — walking around town, working, shopping, going on adventures, etc.

As the sheer number of examples demonstrates, this is a common trope in works featuring funny animals. Here are some possible reasons:

Spats without shoes or socks count as this trope because they do not cover the soles of the feet. These may also indicate that the funny animal who wears them is particularly wealthy.

The One Who Wears Shoes is about inversions of this trope, especially Civilized Animals and Funny Animals who use footwear when going barefoot is normal for the setting.

Barefoot cartoon animals are usually of the Funny Animal or Beast Man tier, but any tier of the Sliding Scale of Anthropomorphism can apply.

A lot of Accessory Wearing Cartoon Animals and Half Dressed Cartoon Animals also happen to be barefoot; to keep things cleaner, this page only covers barefoot characters who are otherwise properly-dressed.

This trope also applies to any non-human character, such as aliens and monsters.

Most of these characters have Humanlike Foot Anatomy.