Comic Book / Angel and the Ape 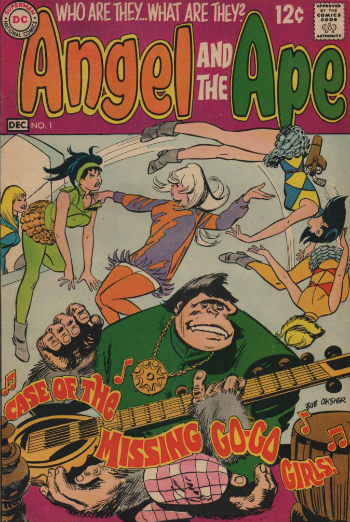 He taught Tarzan how to swing.
Advertisement:

Spinning off from Showcase #77 (September, 1968), Angel and the Ape was a goofy humor series published by DC Comics for six issues in the Silver Age. Starring Angel O'Day, a gorgeous super-sleuth who speaks thirteen languages and knows karate, and Sam Simeon, a comic book artist who happens to be a talking gorilla, the title featured wacky mysteries in the vein of Scooby-Doo. The fact that Sam was a talking ape was played completely deadpan. After their cancellation, the duo spent the next couple decades in comic book limbo, save for a few cameos (including Rick Veitch's Swamp Thing).

More memorable is the four-issue limited series from 1991 that brought the pair back into The DCU. Written and illustrated by master humorist Phil Foglio, the miniseries revealed that Sam was actually from Gorilla City, which explained his ability to talk, and that he was the grandson of none other than Gorilla Grodd, nemesis of The Flash, from whom he inherited low-level psychic abilities that make him appear as a normal human to onlookers. This revival also brought back the Inferior Five, another 60s humor comic; member Dumb Bunny turned out to be Angel's half-sister.

In 2001, Vertigo Comics released another four-issue miniseries by Howard Chaykin. Though extremely risqué, it maintained the same kind of humor. Their first appearance in the 2010s were in the book Scooby-Doo! Team-Up, where they teamed up with Scooby Doo and co, whom they were created in vein of.

Never the most popular characters, Angel and the Ape remain noteworthy for the sheer silliness of the premise.

Angel and the Ape provides examples of the following tropes: