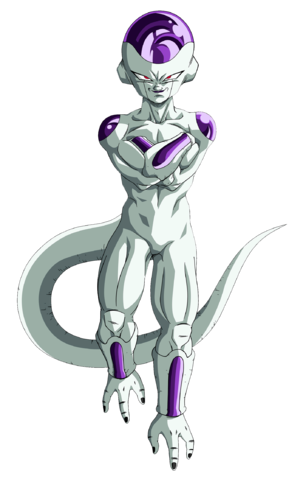 "I dare say you've forgotten how vastly terrifying I can be. Let's refresh your memory."
Click here to see his third, second, and first forms 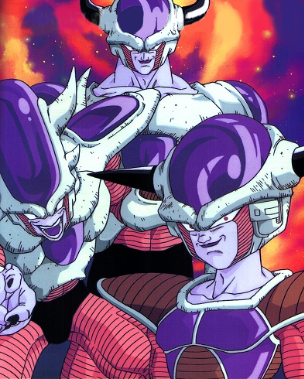 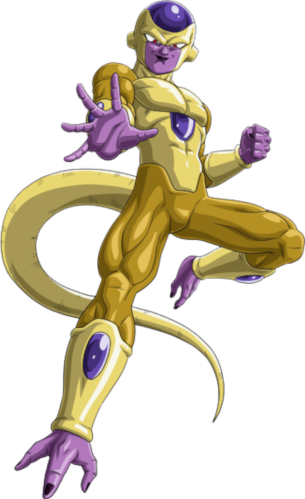 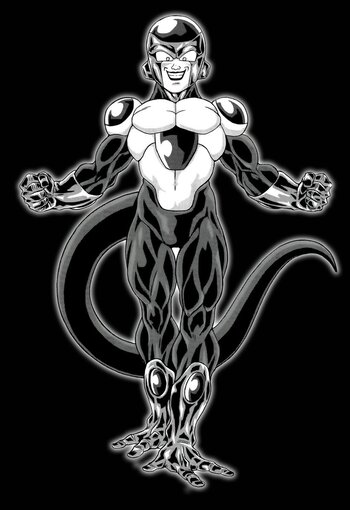 A tyrannical evil overlord who is trying to take over the universe, but his first agenda is to gain immortality through the Namek Dragon Balls. A member of a highly formidable race, Freeza is every bit as cold-hearted as the name suggests, and then some. Responsible for nearly destroying all of the Saiyan race (despite the fact he was employing them in the first place; he got the idea to wipe them out from someone else). After a lot of cat and mouse with the Z Fightersnote Krillin, Gohan, Piccolo, and Vegeta on Planet Namek, he comes into confrontation with Goku leading to the single longest fight in the entire series. Eventually, he is struck down by his own attack and presumed dead after Namek is destroyed. However, he survived and is rebuilt as a cyborg by his father, King Cold, and heads for Earth... only to be chopped into bits and blasted to atoms by Future Trunks upon arrival.

Sixteen years after his death, he is revived using the Earth's Dragon Balls to restore the Planet Trade Organization in Dragon Ball Z: Resurrection ‘F’. Instead he chose to seek revenge against Goku and Trunks. After being told that Goku defeated Majin Buu, one of the two people he was told never to cross, Frieza decides to train for the first time in his life to bring out all his latent power. He largely succeeded and gained a new ultimate transformation. However, he's still done in because he was too impatient to master his Golden Super Mode and his stamina runs out, again. After losing to Goku and Vegeta, he decides to destroy the Earth. Whis rewinds time on him, allowing Goku to kill Frieza once and for all.

However, sometime after the events of his revival and death, he is asked by Goku to take Buu's place, who fell asleep, on the Universe 7 team for the Tournament of Power hosted by Zeno. He is given a 24-hour pass into the mortal realm thanks to Fortuneteller Baba and is completely revived once again by Whis after assisting in Universe 7's victory. The Stinger shows that he has already undertaken steps to revive his empire.

Quite notably aside from this, he is the one who modernized the concept of One-Winged Angel as well as the Bishōnen Line as he abuses both in his fights with the Z-Fighters with ridiculous power increases and used to hide his true power in his fourth form, which is his normal state. Even more notably, other than his obviously justified Smug Super attitude is his absolute sadism, Lack of Empathy and the No-Holds-Barred Beatdown he inflicts on his enemies because of his enjoyment of being superior to other beings and enjoying toying with them. The rest of his family are no different, and he takes after his equally vile father the most. He also has an older brother of dubious canonical status named Cooler that rivals his might.

It's also interesting to note that Frieza is the last villain in the original manga to have any interest in the Dragon Balls; all subsequent villains, particularly Cell and Majin Buu, were more concerned with either acquiring power for themselves or simply wanton mass destruction. It isn't until Dragon Ball Super that the titular holy orbs became a point of interest again for the villains.

Check out his self-demonstrating page.